It is worth noting on this Christmas day in a world where religion is used to divide people, that I was named by my parents after their youth minister, Douglas Macintosh, a theologian who spent 41 years on the Yale faculty and whose thesis was,  It doesn't matter if the historical Jesus did or did not exist, Christianity is a "reasonable" religion:
Pretty mild given the rhetoric of the last 2000 years.

He died at age 71, the same birthday I will celebrate in three days.

Hear what the author of "Hear I Stand", Yale's Roland H. Bainton has to say about Douglas Macintosh: 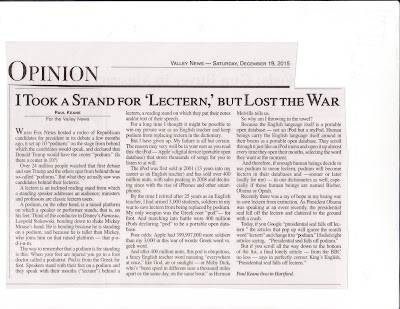 Posted by Paul D. Keane, The Anti-Yale at 4:08 PM No comments: Links to this post

* Banish Armageddon from the Religious Canon 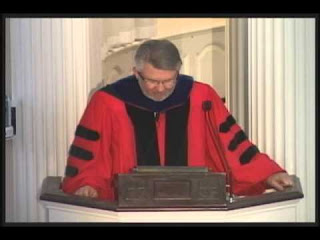 Letter to the Editor
The New Haven Register

The Rev. Gregory Sterling, Dean of my alma mater, Yale Divinity School, has written me in response to my claim in a letter in your paper 12/9/15 that the namby pambly teaching of eschatology( an Armageddon belief-system) as a benign academic category at my alma mater permits its poisonous impact to multiply in believers in many faiths , not excluding Christianity and Islam.

Dean Sterling informs me , " I am not convinced that eschatology is the issue with those who embrace a jihad. You should know that we have been working with the UN to try to remove religion as a rationale/cause for extreme violence. We held a quiet workshop for and the US State Department last fall and had a panel session at the UN this fall. Eschatology has not been the focus of these nor is it likely to be in the future."

Graeme Wood in a September Atlantic article "What does ISIS want?" describes such bridge-building efforts by Muslims in concert with Christians as naïve, "a cotton-candy view of . . .religion ' in the words of Islamic scholar Bernard Haykel.

Mr. Wood continues, "Many denials of the Islamic State’s religious nature ... are rooted in [what Haykel calls] “interfaith-Christian-nonsense tradition.”

Dean Sterling, Graeme Wood and Bernard Haykal, see the trees but not the forest: All religions which include Armageddon as a belief-system, are throwing gasoline on the inflamed minds of wannabe martyrs, terrified of eternal torment and hungry for eternal bliss.

Religious scholars need to acknowledge their cotton candy complicity in this dangerous scenario by minimizing the role of religion in turning believers into killers, at , , at the Branch Davidian compound in , , at the marathon, at a Fort Hood Colorado Army compound and in a San Bernadino special needs facility staff gathering.

Armageddon should be banished from the religious canon as a paranoid delusion, not taught as benign theological embroidery.
Paul D. Keane
Posted by Paul D. Keane, The Anti-Yale at 2:10 PM No comments: Links to this post

LINK to Register Letter to Editorhttp://www.nhregister.com/opinion/20151210/letter-to-the-editor-yale-needs-deeper-soul-searching

Religious scholars need to amputate eschatology from  all religions like the malignant appendage it has become. 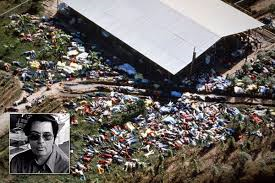 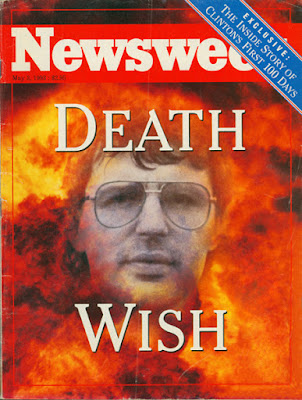 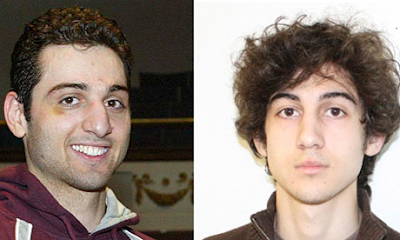 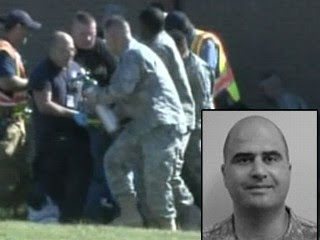 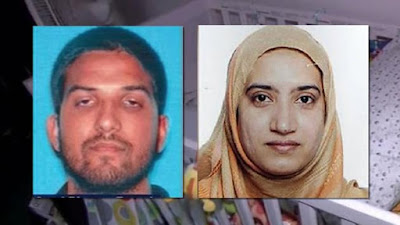 Letter to the Editor:


Posted:                                          12/10/15, 4:18 PM EST | Updated: 23 secs ago
Yale shouldn’t simply change the name of Calhoun College to that of an alumnus who is not a white supremacist. It should re-examine the mission of the Divinity School (where I received a Master of Divinity degree in 1980) which treats eschatology like a benign academic theological category, instead of the dangerous and incendiary belief-system that it is, in whatever religion it appears.

It is not Christianity or Islam which is responsible for many of the mass killings we have seen in my lifetime. It is the unchallenged belief in eschatology (end time; final judgment; apocalypse) which has produced Jim Jones, David Koresh, the Tsarnaev brothers, Army psychiatrist Nidal Hasan, and the San Bernandino husband and wife shooters, all in the last half-century.

It is time for President Peter Salovey’s challenge for Yale to engage in soul searching to be expanded to include the Divinity School on a topic equally as poisonous as institutional racism: the belief that God will punish mankind for not obeying his sacred word, by imposing a final judgment in an end-time of hellfire and torment or of eternal bliss. 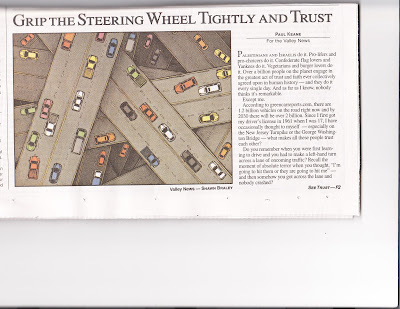 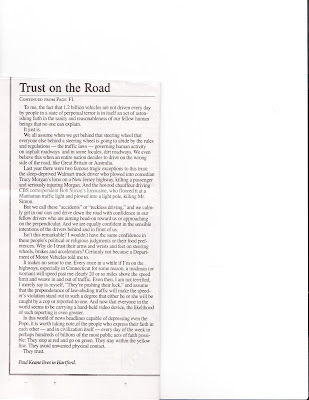 Posted by Paul D. Keane, The Anti-Yale at 4:51 PM No comments: Links to this post

The Thornton Wilder Society invites proposals for a panel on Queer Readings of Thornton Wilder.  As documented by recent biographies Thornton Wilder: A Life by Penelope Niven and Secret Historian: The Life and Times of Samuel Steward by Justin Spring, Thornton Wilder lived as a deeply-closeted gay man.  Recent revelations of the author's secret sexuality present new opportunities for Wilder scholarship in the field of Queer Studies. Possible approaches include Wilder's depiction of "secret lives" or "lives separately led"; the author's presentation of both traditional marriage and same-sex relationships (e.g., Barnaby and Cornelius in The Matchmaker); issues of gender in Wilder's Stage Manager characters; characters as autobiographical surrogates for the author (e.g., Theophilus North, Dolly Levi, or Simon Stimson); and Wilder's texts in conversation with gay authors (e.g., Edward Albee, Tennessee Williams, William Inge, Lanford Wilson).  Proposals on Wilder's plays, novels, or other writings will be considered.  For info about his works and available editions, as well as published Wilder scholarship, go to
www.twildersociety.org/works/ and www.twildersociety.org/education/bibliography/

We encourage graduate students as well as established scholars to submit 500-word proposals and C.V.s to Park Bucker atpsbucke@uscsumter.edu by January 4, 2016.
﻿﻿


I certainly don’t know anything about Wilder’s sexuality. I only met him once, the year before he died, and exchanged a few letters and cards with him. And  besides, who “knows” what is going on in the head of another person, especially about the excruciatingly private matter of eroticism.


The reason I have been asked to write about this topic, I think, is because I was friends with ’s lifelong companion, his sister Isabel, for the twenty years after died.
http://wilder1985.blogspot.com


She treated me like a grandson, for which I am very grateful, even funding my apprenticeship to become a public school teacher in in a real-life Grover’s Corners, in 1987/88, a career from which I retired three years ago after 25 years.  I miss her and wish she could see me now.


I was present in her home at Whitney Center in Hamden when Miss Wilder reacted to having been given by the editors the manuscript of Gilbert Harrison’s official biography of Thornton, The Enthusiast, including (and especially) the section on his sexuality in 1983. “I’m an old lady. I’m reading along and I come on some old homosexual experiences they dug up which had.  They gave me no warning.  I can’t be treated that way. After all, I’m an old lady .” She was 83.


I knew Miss Wilder was waiting for my reaction.  She was testing the waters, I thought, to see how the general public (me) would react.  I said, “Oh they say that about all bachelors” and brushed it off, quite intentionally.  I knew her feelings were hurt, and we were friends.  I didn’t want to open this wound further. I was 38 in 1983.  We remained friends till she died in 1995 at age 95.


Miss Wilder’s older brother, Amos (who died at 98 in 1993 ) warned literary critics  in his 1980 memoir  Thornton Wilder and His Public about the inaccuracy of speculating  about his famous brother’s choice of vocation, clearly suggesting that that choice was the sublimation of an artist.


I don’t know anything about that.


Thornton Wilder was an intellectual.  He knew the self-defeating mistake of Oscar Wilde’s public defiance. The stage-manager  of his own life , Wilder wasn’t about to defy convention even if he did advocate the theatre as a place where   “window-breaking ideas”  should  thrive.


What interested me about Miss Wilder’s reaction was that she didn’t deny the accusations.  She artfully reframed the argument to make the issue not Thornton’s sexuality, but the rudeness of the editors in not warning her that when she proofread the manuscript she would encounter some passages about her brother’s bedroom behavior.


She was implicitly accepting “old homosexual experiences” as nothing shocking.  Would I do so too, as the private audience to her dismay at having been treated poorly, not by the official biographer, but by the rude editors?  The answer was, yes.


She later recounted to me having attended a dinner in celebration of the official release ’s biography. She told me “I was asked to give a toast and I toasted the man. I didn’t say a word about his book.”


Ever the lady, ignoring the spirit of the occasion while being courteous to the scholar being honored, she managed to choreograph a civilized ‘punishment’  for the biographer’s transgression, if indeed she even saw it as a transgression.


Since the issue had been transformed in Miss Wilder’s inimitable  manner  from the official  biographer’s scholarship  to editorial rudeness, the matter of the text’s veracity would now be forever fogged over by her indignation as “an old lady,” as far as she, ’s literary executor, was concerned.


But I’m not sure about that “old lady” bit.  The same year, 1983, at a time when no one wanted to be associated in any way with the frightening new, always  fatal, illness called AIDS, which had the stigma of being a “gay disease,”  Miss Wilder quietly and courageously funded a brochure entitled AIDS, SEX, and YOU , written by a Yale biology professor.  After considerable lobbying, I persuaded, Yale’s president, A. Bartlett Giamatti, to provide that pamphlet to all Yale graduate students.


Miss Wilder read the pamphlet cover to cover in my presence and she did not ask to edit it in any way despite her financial underwriting of the project.  Frankly, I was surprised that she did not blink an eyelash at any of the coarse and graphic language.  She understood the urgency of responding with information to a fatal disease with no cure and no biologically identifiable cause  (1983: HIV had not yet  been discovered).


Clearly she was able to look that reality in the eye, bedroom or not. I thought she was a “groovy” old lady, to use a 1980’s expression.
http://aidsatyale.blogspot.com

Miss Wilder insisted that I not reveal her role in this effort during her lifetime. I kept that promise until last year, nearly 20 years after her death in 1995.


I know little about Queer Literary Criticism.  I should think that unlike Tennessee Williams or Truman Capote who didn’t really fear scandal, the warning of Amos Wilder makes it clear in 1980 that he as firstborn, and his remaining siblings, including Miss Wilder (who by then  was Thornton’s literary executor) )  felt the need to warn the public about the irresponsibility of speculating about  artist Thornton’s complex personality.


Queer Studies would have appalled the Thornton Wilder’s family in 1980.  But it is a new time and a new world in 2015 .


Thornton Wilder is buried 50 yards from my parents’ cemetery plots. I used to tend his grave for Miss Wilder when she gave up driving at age 85.   He went to that  grave in 1975  knowing that he lived in a country where homosexuality was not just a scandal but a crime.


This year, 2015, gay marriage became the law of the land;  but, for nearly three decades after Thornton was laid to rest in Hamden’s Mt. Carmel Burying Ground,  potential disgrace hovered over homosexuality itself in the United States, until Lawrence v. Texas (2003) decriminalized sodomy and made homosexual acts a matter of personal freedom.


The irresponsibility of speculating, as Amos Wilder had admonished, ’s ‘public’ not to do,   is now a benign --- and  perhaps even charming ? --- variation in the art of literary criticism.


I wish The Thornton Wilder Society well in its courageous call for papers on Wilder and Queer Studies.

Posted by Paul D. Keane, The Anti-Yale at 7:40 PM No comments: Links to this post 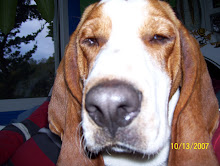